Mayank getting married in Nagpur with Bhakti kalyani

Mayank is getting married on 16th. He is one of my closest friends and with whom I share most memorable moments in my life. I had mentioned about him before in my blog, and you could refer this link for more details. I am not sure whether I would be able to witness his marriage, as my leave is not sanctioned. Hope he will not be angry and would share at least the photos to see it virtually.

I met Atul Sadhu last month and we went for the movie, mission impossible – ghost protocol. Tom cruise walked out of the tall building and then an explosion was heard from the speakers mounted around the theatre, when Atul’s phone started ringing and to the surprise, it was Mayank. It appeared he was busy and was at Nagpur for a marriage of their friend Saurabh. Though I was not able to meet him during his visit, thought would do so during the time visit again for his marriage. 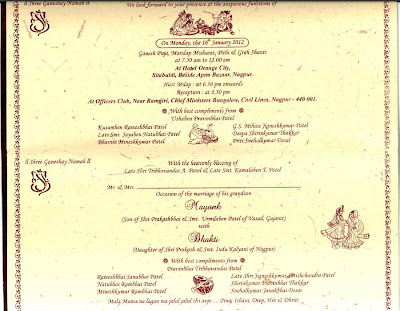 Mayank Patel, full name Mayank Prakash Patel is going to marry Bhakti kalyani says the card he sent through email. He was one who involves with families easily and creates a close relationship through his behaviour. Scholar by his character, he always imitates the behaviour of a not so complete person, always worried about his future and people surrounding him; unlike me who is never worried about anything in life.

Amma says it is not a good time for me and that I should be visiting the temples. Getting up at 8 Am in the mornings when the god’s have left their bed and are ready for a breakfast isn’t a right time to disturb them, right?

I am going to see my grandparents today, a long time and they are complaining of me not seen. I would be joining the gym on Monday and hope it would be tiresome losing the extra amount of fat accumulated by the last visit at home. Appearing as the best transformation of the year on bodybuilding.com isnt my ambition 😉

Another Love stroke, it is Mayank Prakash Patel this time