It was on this dark day, when the clock in the hall was dead, tube light was blinking as never before, insects, cockroach, and ants were running as if they had participated in a marathon and my head was loaded with 100 kg, temperature at 110 degrees. I was feeling weak and was advised to visit a doctor at the earliest. It was 14.7.2011, a Thursday at 7 Pm when I took my bike and rushed to a nearby hospital. I pronounced my name to the woman who was accounted to enlist the patients visiting the hospital and issuing them unique identification cards, “Abhilash Mohan Pillai”. She then enquired my address to which I said “Palace No. X, Tripunithura” and she looked at my face as if I was an antique piece released from the ancient palace, hmm… it was a house registered under palace no. x and not a museum! She charged me 80 rupees and issued a white colored plastic card with top and bottom borders in blue that had my credentials engraved in black. She said that the physician isn’t available and I should meet the duty doctor (they are normal doctors holding/ not holding any accredited degrees and prescribing medicines to common illness). I moved towards the casualty wearing a green jacket, black pants and kolhapuri chappals(Kolhapuri chappals are prepared in Kolhapur and popular in India for their toughness). 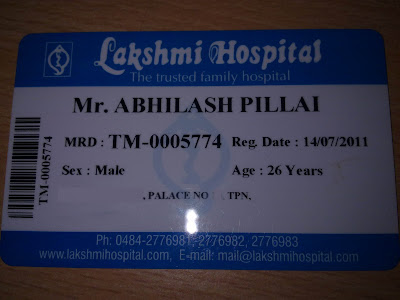 My name was called by a male nurse and I was asked to sit on a chair. He then pointed a thermometer and kept it in between my arms. After few seconds he took the device and said that it is an alarming situation and my temperature is very high. I visited the doctor and he started to press on different parts of my face, stomach enquiring if I am feeling pain. He prescribed a long list of medicines and asks me to take them and see if I could notice any difference. If I feel no progress I could consult the physician the next day. The doctor asked me to take an injection and I was said to be in the casualty room. A group of female nurse was murmuring looking suspiciously or rather adorably at me; I am doubtful what their expressions were. Some among the group passed a comment to which others smiled but were scolded by the male nurse to leave the room. The nurse who was a male took an injection without letting me know that he pierced some unused needle (I always personally make sure the needle is unused ;)) into my flesh. I was given a shopping bag full of different colored medicines in various sizes having logo of the hospital in big, clear fonts.

I was feeling better and the symptoms of the fever were gone leaving tiredness as a side effect of the medicines. I was resting at home when on 16/7/2011 afternoon I felt cool and suddenly the water and liquid inside my stomach started to erupt from the mouth. I rushed into the bathroom and soon the stomach was empty leaving me restless. I called Jinu and went to see the doctor, forget to mention that I did a vomiting thrice before Jinu reached.

We reached Lakshmi hospital and found another duty doctor there. I was not sad taking into account that I always reach hospitals when the consultation time of physicians are over. He asked the nurse to inject an injection for my vomiting tendency. This time it was arms that were used for injecting the medicine named “ini Emset”. A female nurse was holding my hands and the male nurse pricked the injection in my hand. I was advised by the doctor to have some medicines. 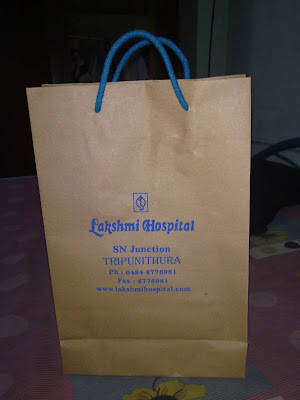 While I was at the pharmacy, I saw swelling around the area where I was injected. I rushed to the doctor and he advised me to be in the casualty. This time it was the turn of “Adrenaline” to enter my body. The male nurse asked me to loosen my pants and injected a big needle into my waist. He did not take the needle out and dropped another injection pump into the same needle making me yell twice. This was not over yet, and the nurse said me to relax as I have to be given two doses of glucose bottle. The nurse took my hand and started searching for the veins. He injected once into my hand, then pulled it back and inserted again. He tried it three times with each time injecting and taking the needle out. Ultimately he figured out the veins in my body. The liquid inside the glucose bottle was entering my body making me colder and appear blood free.

Soon the doctor came and asked me to be in a room that they have arranged for me. I stood up and while I started walking, a woman asked me to sit on the wheelchair. I said I was fine and could walk to the room but she insisted I should sit. I made her happy, maybe she will get an extra for taking me to the room or maybe she was making her position ascertain.

A nurse came, now this time a female and again the liquid started to flow through my veins. Jinu went outside and came with a magazine and started reading. He waited for 40 minutes to get the bottle empty. The nurse came and replaced the empty bottle with a new one and I was to wait until this is vacant. I manually made the flow increase and the new bottle was empty early than the latter.

The doctor asked me to have some food and if I still feel vomiting he need to examine me in detail. I ate few bread pieces and was feeling better. I left the hospital with a bunch of medicines.