An effort to kill the mental illness

It was afternoon, the street was vacant around kilometers and I was driving the bike at 70 km/hr. Hot air was blowing from the sides, back, front and everywhere it could find a way in. We were speaking about Solaris and Sameer’s craziness about the software’s and computers. I turned my face and saw a person riding cycle in front of me. I pressed the brakes as hard as I can to make him pass my sight. The pressure was on the front brakes; and the back tyre made its way in front of the later causing us to taste the dirt and mud on the ground. That was the first time Hanish scolded me. 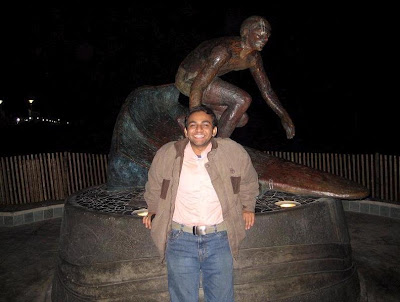 Hanish is my friend who was with me from fifth class until engineering. We were travelling in his new Fiero bike with the knowledge that I was deprived of a license.

Hanish is one of the great friends I have, who has helped me in my life. He called me a couple of days ago from Gujrat. He is in USA and visited India after a period of two plus years for a celebration announced on the occasion of his nephew’s mundan ceremony. He is completing his MS in Los Angeles and often sends me the pictures from Hollywood. He is the only friend who calls me monthly even though he has to spend a grand; and that’s what is called a friend. Isn’t it?

We spoke long until his mother prompted him for the dinner. He left the phone with the message that I can call him back the next day on the same number. I was busy with work and escaping from my life, so did not call him until now. It has passed a week and I am not yet ready to contact him and share old memories.

I do not understand why people start loosing relationships and their importance when they start working in an IT background. The corporate world has its flaws that are hidden behind the money it showers. People can smile in a meeting and exchange old memories but they never remember things again. An amnesia that could be better called a short time memory loss.

I stopped calling my parents daily and made it to once a week. I did not want to keep the nostalgic moments entering my minds when I am far. This extended further and now I call them when they ring back asking my whereabouts. I love my parents and want to keep close with them but I am also a victim of the busy corporate world. This is the reason I can give to the people who ask for the causes of not calling them. But I know that’s not true.

I gave my mobile for a service to let Nokia correct some wifi problems and update the firmware. I bought a packet of pakodas, bread and big bananas for the dinner. I hope that can satisfy the burning stomach.

I am trying to get out of my created problems and find a way to reach my old behavior. I will call my parents tomorrow and some of my friends. I hope this will help me have a refreshing breath and cure my mental illness.