I went to meet my grand parents on saturday. My Aunt has two boys and both of them were waiting for me. It has been 3-4 weeks since I went there. I reached home by 10 PM, and the boys already went to sleep being tired waiting for me. 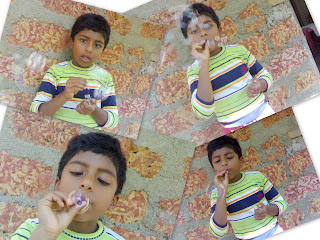 Akshay Kumar is the elder amoung the two. His full name being Akshay kurup and nik named Thangu by his mother and family. He is to join the second standard.
He bought a bubble toy the same day I came and was blowing and making bubbles that seem very nice for appearance. I took some pics of Akshay kumar blowing the bubbles.
It remind me about my childhood when I once accidently drank the soap water given along with the toy to blow bubbles.

Akshay is a mischevious boy, who “always” never listen to anyone. I still remember the incident when he burnt the dry grass in the fields playing with match sticks. He was beaten badly by his mother. The next week he again burnt the leaves but this time the fire was severe.

There was another incident when he was being scolded by his mother and was crying on the road side. An old person walking the way felt nervous and said him ” son, please dont cry.. we will find a solution to whatever problem you might have. Could you please explain it.” In return he said a word and the old fellow ran like nothing. He said “Poda Patti”( in malayalam pronounced as go away you dog)… ha ha it was nice watching the old man running with life.

Children are too clever and mischivious these days. They are too sharp and learn everything without actually known about the good and bad. They hear words said from a professional to a street boy. It is always advised that parents be calm and try to make their children differentiate between good and bad.